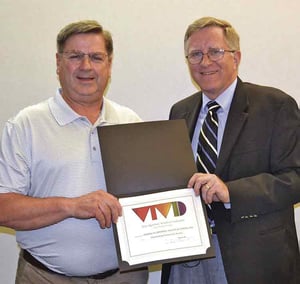 The Athens City Council recognized a pair of brothers and the company they founded as its Very Important Volunteer Individuals for the month of May.

At Tuesday's meeting, Council member Bo Perkinson presented the VIVID Award to American Bedding Manufacturers, Inc., and its owners, Boyd and Dale Reynolds. The award is given to individuals who have made significant contributions to the community.

Perkinson, who made the nomination, stepped to the podium along with Dale Reynolds. Boyd Reynolds was unable to attend the meeting.

"Boyd and Dale Reynolds exemplify the spirit of the VIVID Award," began Perkinson. "The brothers had a vision to become the leader in providing quality, comfortable bedding and furniture products to camps, shelters, missions and other institutions across America and globally."

Boyd and Dale Reynolds are not only successful entrepreneurs, but also leaders of their community who care deeply for those in need.

"We appreciate our manufacturers in this community, and this is a great example of cooperation from them," said Perkinson.

The Reynoldses have graciously allowed members of the Athens Fire Department to use the company's parking lot as a staging area for training exercises. The facility, located on Redfern Drive, had a large parking lot perfect for pump training, operator practicals and driver training.

"This training is vital for the safety of our firefighters and the citizens they serve," said Perkinson.

On Nov. 30, 2016, a tornado destroyed four of the five buildings on the campus of Fairview Baptist Church and Fairview Christian Academy, as well as many other residential and commercial structures. Temporary locations were desperately needed.

"It really took a toll on our community and, as usual, our community rises to the occasion, as exemplified here by American Bedding," said Perkinson.

The Reynoldses made available to the Fairview congregation the previous American Bedding building, located on Dennis Street, while the church auditorium was repaired and restored.

This building also served as a "one-stop-shop" for tornado victims, donors and volunteers. Members of the American Red Cross, Coordinated Charities, and the Southeast Tennessee Human Resource Agency staffed the multi-agency resource center to provide assistance for those affected by the tornado, while also taking in donations for the relief effort.

"It turned out to be an almost perfect location," said Perkinson.

Boyd and Dale have assisted the community in many other ways, including use of their Dennis Street building for the McMinn County Living Heritage Museum's Annual Trash & Treasure Sale.

"It's a great pleasure to be able to give back to the community," said Dale. "We accept this award on behalf of all the employees of American Bedding."

"The Reynoldses are a vital part of our community," said Mayor Chuck Burris as the presentation concluded.

The above article was written by Andy Brusseau of The Daily Post-Athenian. For more information about the products at American Bedding Manufacturers, Inc. check out our catalog by clicking on the link below!